About 100 people gathered on Bridgwater’s Kings Square at 6.30 on Thursday 3rd March 2022. Candles were lit, Ukrainian music played, and speeches were made by Ukrainians present. Bridgwater people mixed with Ukrainians, Poles and other nationalities . Town Council Leader Brian Smedley (Westover) said “So many people want to know what to do confronted with the awful reality of events in Ukraine. The vigil in King Square was a way of focusing on that, on showing solidarity with the people of that beleaguered country and admiration for their courage and resolve. It was very moving to hear from  Ukrainian people living in our town and other representatives of the international community in Bridgwater, and to see so many people there, united in their support of the people of Ukraine. Unity, dignity and determination, as we see exemplified by the government and residents of Ukraine, and by the Russian peace activists risking everything at home to protest this war, is what we must all practise now. We must stand with Ukraine, and the vigil helped us, in a small way, to do that. “

Cllr Smedley announced afterwards that the Town Council would be supporting an initiative by the ‘You are not Alone’ group to help collect goods and send them to the Polish border towns where support groups have formed.

Ukrainian speaker ,Olga,  told of her family who are near Kharkiv, which has been heavily bombed by Russian missiles ‘living in hell’. She said she was  in daily contact with them and  had been “surprised and overwhelmed” by the love shown to Ukrainians by so many people. “They told me the shelling is horrendous and they are living in hell. The last text I received from my mother, she said ‘we survived another night, thank God for that’. My family have to go up and down to the cellar and my university friend living in Kharkiv city centre said there’s nothing left,”

How can you help?

She said her family told her community spirit was high and people were sharing food and water in Kharkiv, but it has been impossible to send simple things like paracetamol to them as there was no green corridor. “We would implore for the Red Cross to get basic supplies for people in Eastern Ukraine. They need supplies for newborn babies and daily medication for things like HrT and blood pressure as people are running low on medicine.”

To donate to the Ukraine Humanitarian Appeal click here.

Memories of a vigil

Other Bridgwater people who attended the vigil were also moved by the experience.

Deputy Leader Cllr Kathy Pearce said  “The moving speeches,  stirring national anthem and the coming together of a community who look on in disbelief, shock and horror of events unfolding before our eyes. “

School support officer and local parent  Liz Marsh commented “I was really moved by the heartfelt tributes made and the number of people there across all ages, backgrounds, cultures and beliefs. We are one with the Ukranian people, such obvious oppression must be stood up too always.”

Church based youth leader Megan Boucher added  “Alice and I attended this Vigil for Ukraine yesterday. Listening to a beautifully eloquent Ukrainian speaker: 142 schools have been destroyed in the last week, I held Alice that little bit tighter. “Today, we are all Ukrainian” we must do all we can, no matter how small, to stand alongside the people of Ukraine.”

Speech by Ukrainian speaker Galyna is here in full. 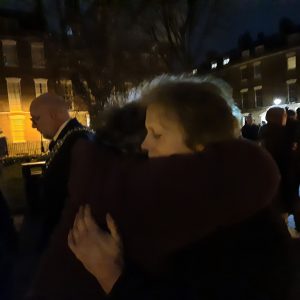 Health worker Elaine Di Campo embraced the Ukrainian organiser after the event and said  “The lady talking was shaking by the end and so distressed I hugged her. “

Chair of Bridgwater Together, Chilean Viv Rybertt said “It was an emotional vigil last night at King Square. People standed for Ukraine listening to the spokesperson who after her speech had broken into tears. We don’t stand for Ukraine because we feel sorry for them. We stand with Ukraine because this could also happen to any of us. So we empathize with their pain and fear. Not long ago the UK was bombed and families had to scatter, sending their children to Australia and Canada. In 2022, this is happening with Ukrainians. In 2022 we still can’t live in a peaceful world.”

Mayor of Bridgwater, Leigh Redman, attended the vigil and afterwards said “I was pleased and greatly touched to be able to attend King Square last night to offer my support to those residents of Ukraine and anyone suffering through war, Bridgwater has been so welcoming to those in need and over the past few days. We have stepped up. Thank you all”

Another Westover resident added “King Square was a moving and peaceful place for European families to assemble to express deep solidarity with the courageous people of Ukraine. To see the children enchanted by the candlelight reminds us that we have a collective responsibility for assuring a bright and safer future for them. We must find a way through this horror with them.”

Cllr Smedley added “Bridgwater King Square memorial is special of its type. It’s not a war memorial but a peace memorial. The ‘Angel’ statue depicts civilisation with emblems of education, peace, commerce, the home, labour and life all above the demons of war which are being trampled underfoot. This was erected after the First World War…..when will we ever learn….?”