What did the Europeans ever do for us? Well, they brought us Proportional Representation for one thing. And PR means you can vote for who you want and it means there’s no such thing as ‘Tactical Voting’. Lib Dems -who are trying desperately to claw back the 1 seat they lost in South West England are at it again trying to convince people that to stop Brexit you have to vote ‘tactically’ and implying (well, in fact saying) that this means voting for them. They are wrong of course. The PR system we have means you aren’t voting to stop  Brexit, UKIP or the Tories (although the last lot are doing a pretty good job of stopping themselves) you’re voting for who you WANT to be in power in Europe when all the votes are in next Monday. I will be voting LABOUR.

Europe is in a mess. The dream of the post war generation (that was simply – “not to have another war”) has turned sour and Nationalism, Xenophobia, neo-fascism , racism, bigotry and people being generally bonkers, is on the rise. How do you fight that NOW before you have to fight it like they did in the 1930s?

Nazis are a Bad Thing

The lesson from history is that all the above is a bad thing and so we don’t want it to happen. Good. Spot on political analysis there. So how do we stop it?

On Thursday in the UK (and over the weekend in most other European countries) we’ll be voting for who we want running Europe. People who vote for UKIP or the laughably dangerous ‘Brexit Party’ -you know the ones, a sort of light blue tory tinged pointy arrow party covered in a frothy white milkshake, will be electing MEPs that will join the far right bloc on the European Parliament. That’s a group of populist anti-immigrant  nationalistic right wingers who have either taken control of their countries (Italy and Hungary for instance) or who are on the rise or in some cases the main opposition (FN in France or AfD in Germany) and they call themselves slightly misleading names like ‘the Freedom Party’ (freedom to hate who you want to really) and have slogans like ‘towards a common sense europe’- maybe like in Hungary where they’re built a giant wall around the whole country to ‘keep out the immigrants’ . So what’s in a name? If Hitler’s party had been called the Lovely Fluffy Bunny Party then maybe Poland wouldn’t have minded being invaded by them.

Being Nice is Nice

In Britain years of street fighting the Nazis back into their holes and Labour-voting them out when they trick their way in to the halls of power by pretending to be respectable, have all come to nought as a result of the Brexit referendum. Cameron’s massively misjudged gamble to shut up the far right in his own party simply resulted in him dropping the crystal chandelier of idiocy as he delicately carried it across the minefield  of twattishness and opened a pandoras box of thinly disguised hate.

Who would have thought that an old Etonian who had told people he was going green and suggested we hug a hoodie would end up bringing in a vindictive and callous policy of austerity backed up by the Liberal Democrats. Hold that thought…the Liberal Democrats. That was a good tactical vote wasn’t it. Thanks for the austerity libdems. What do you want us to trust you with next?

There is no tactical vote in European elections. If you vote Lib Dem , you’ll get LibDem. And do you want them? Of course, if you were a BrexKip voter and decided you were so daft then a libdem vote WOULD be a tactical vote. But that’s not too likely. And that’s not who the Lib Dems are asking to vote for them. Really they’re trying to get Labour or Green or Tory voters to vote for them. Now of course they’re welcome to Tory voters. They’re frankly welcome to Michael Heseltine. But I don’t think you’ll get Anne Widdecombe going ‘oooo I think it’s Lib Dem for me this time!’

No, the Lib Dems are (as they seem to do oftenly) trying to get other left leaning ‘Remain’ voters to vote for them. And across Britain remember they only have 3 MEP seats. In the South West they don’t have any. So the 2 hard working left parties -Labour and the Greens, have got  2 out of the 6 seats. If you’re Green, vote Green, if you’re Labour vote Labour. That will keep our seats. Voting libdim will lose them. 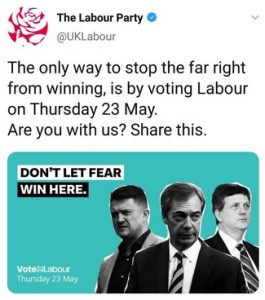 Your Labour vote across the South West is not a ‘wasted vote’ . You may look across the hills from Ashcott, Ashbrittle or Ashbastard and just see Tory,Tory,Tories but in fact your vote will go into the same counting box as the massively Labour Massively remain Labour cities of Bristol and Exeter. Not to mention the 99% of people in Gibraltar who voted remain and who are , oddly, part of the South West of England.

When you elect a Labour MEP they join other socialists from other parties across Europe. That’s the second largest political alliance on the European Parliament. That’s an internationalist party of European unity that has the real power to do something as a result of these elections. That’s the party that really can deliver the European dream of unity, equality, solidarity and real freedom. That’s the vote that will give us a powerful socialist group that can challenge all the things that are wrong in the LibCon controlled EU and that’s the vote that can stop the Far Right destroying the EU and taking us back to the 1930s.

In May 2015 the newly elected Bridgwater Town Council promised to open its doors to the wider public, engage in extensive community consultation and keep people informed and up to date with what’s going on in our town. This column is the Council Leaders contribution to that process.