If you think about bands that have been together for a long long time you think of Status Quo with their timeless riffing (which they use in every song) or Spinal Tap with their 57 exploding drummers. This September the Czech Republic’s oldest surviving rock band THE VILLAINS will be in Somerset, on tour and bringing their wealth of time travel musical experience to a theatre near you starting on Friday 6th September where they will be headlining an International Music evening at the Bridgwater Arts Centre at an event promoted by ‘Bridgwater Together’ and featuring music from Poland, Portugal and East Timor. The event starts at 8pm and  costs £10.

The Villains were founded by four high school students and friends in 1966 in Prague.  By 2019, three of the original band members, Georgi Štilijanov, Václav Chaloupecký and Aleš Kraft, remained.

The band have seen many changes in the Czech lands during their musical career from the liberal days of the Prague spring back in the 60s to the Soviet clampdown of the 70s, the velvet revolution of the 80s through to the swing back to the west of the 90s and the joining the EU and NATO in the 21st century. And through it all they’ve done their own thing. And sometimes other peoples.

The band writes and plays its own songs along with well known covers from famous artistes, performing some 130 concerts at home and abroad each year. Aside from its own songs, which have been put out on four CDs, it focuses on classic blues rock music from the 60s onwards by well-known authors such as John Mayall, Eric Clapton, the Rolling Stones, J. J. Cale, Procol Harum, Credence Clearwater Revival, Bill Wyman and more. 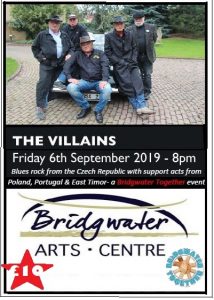 The current line up is

Here a sample of them here

You can catch the Villains around Somerset at the following venues