Some things what happen in Bridgwater and some equally personal thoughts about them by Westover Councillor and Town Council Leader Brian Smedley. All opinions expressed in this column are not necessarily not bonkers. 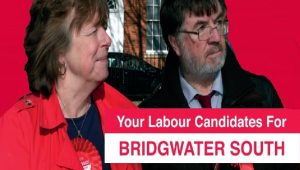 Well, I have to say it’s the first time I can remember the Bridgwater Mercury not running information about the local elections. But there is an election happening and it’s today, Thursday 5th May 2022. Why is it important? Well, on many levels. You can send a message to the Tory Government in Westminster that you’re not terribly happy about the way they handled Covid, the timing of their garden party’s or the escalating cost of living crisis and you can also decide on 2 very important local elections. Not many people wanted a Somerset Unitary Council…in fact a majority said they didn’t. But we’ve got one and now we’re electing its councillors for the next 5 years. So one ballot paper lets you choose which 2 you want for your area. And Bridgwater is divided North, South, East and West. That’s 8 local Bridgwater Councillors. I’d say we need 8 LABOUR councillors. Then we’re electing the Bridgwater Town Council. In future it will be stronger because after next year there will be no more Sedgemoor District Council. I’d say that’s a good thing and we need to make sure it’s LABOUR. So I’d say vote all 16 Labour councillors in. But elections aren’t that simple so here’s a helpful guide for today’s elections…..in Bridgwater at least.

END_OF_DOCUMENT_TOKEN_TO_BE_REPLACED

It was like the Treaty of Versailles, the Congress of Vienna and ‘It’s a Knockout’ all rolled into one. Thinking back to those difficult negotiations back in 2009 when I faced the Duchess of Durleigh across the drawing boards of the late and unlamented Sedgemoor District Council while we arm wrestled over the boundaries of the new electoral wards for the town. This was how Westover was created. The Boundaries Commission was changing everything..again…to reflect population changes and community and none of us was going to get everything we wanted. So Westover was my idea. It was about time we reflected some of Bridgwater’s history in our warding system. Westover was the historical name for ‘this side of the river’ to balance Eastover on ‘the other side’. Basically it would be the town centre and the areas just off it. So, the Docks – but the boundary ran through the middle, the canal..but we overlapped to Lyndale and off along the A39 for a bit and then down the A38 and along Taunton road (until it became Hamp). However, the crucial area of dispute was West Street…and here it almost came to blows…

Westover was created, not in the white hot smelting plants of industry. Or with any logic for that matter. But by pushing pens, drawing lines, shouting ‘quick look that way!’ then drawing more lines and  then finally seeing which of us the Boundaries Commission eventually agreed with. I think I won. Well, we have a geographically almost sensible area….and of course militarily sound should we be attacked from..say..Wyndham. And let’s face it…Wyndham was my idea too…That part of town should have been called Durleigh..because that’s what we know it as..but they called it ‘Quantock’ which was confusing because there’s another ward called Quantock..well, in the ‘Quantocks’. So I came up with Wyndham.  The ‘house’ name for that end of town at the old Doctor Morgans (now Haygrove). Yes, my old house. The ‘red’ house. As opposed to the ‘Blue House’ of Fairfax (Sir Thomas) oddly comprising Hamp and Sydenham. But the Duchess said she knew ‘the Wyndhams’ and so she was happy with that…but not so happy that she’d lost most of West Street. Isandhlwana all over again….

Westover was created in time for the 2011 elections. Myself and Kathy Pearce have represented it ever since. And it’s been solidly Labour. However, for Town elections we have an extra seat. That has changed each year and we’re very happy that for his first venture into politics, Tim Mander will be our running mate this time round.

Tim is well known for his work as a senior officer with Sedgemoor, but not many people know that he is related to the really rather  famous  Sir Walter Raleigh until this was picked up recently by Westover resident Roger Gently who wrote to us “I was struck by the uncanny similarity between prospective Member Sir Walter Raleigh and noted 16th century sailor and scourge of the Irish Tim Mander.  I enclose a picture which I hope will further confirm the uncanny likeness.”

So for Town vote Mander, Pearce, Smedley and for Unitary it’s just the 2 of us..and therefore  for the new ‘Bridgwater South’ Unitary ward please vote Pearce & Smedley on May 5th..or..if you can’t control yourself, as soon as your postal ballots come through in a week or so from now.

Westover is where I live and of course it’s all of Bridgwater rolled into one. The history, the culture the people, the river, the canal, the docks and of course the town centre. I’m especially happy to have been part of the original creation of Westover and to have shaped its appearance as we’ve worked to make it a better place to live.

I’m particularly pleased with the West Quay pedestrianisation and cafe-bar scene there that we came up with after the collapse of the wall. And we weren’t sure we would even have a quayside after that. I remember going back up to my old flat on West Quay and feeling the building slightly swaying like boarding a ship….

But mainly….I’ve written a piece of music for Westover. And here it is…

For as long as we can all remember, Bridgwater has been a smaller part of something bigger. Whether it was the abolition of the popular, historic  and radical Bridgwater Borough Council in 1974 when they created Sedgemoor District Council and Bridgwater lost it’s ancient privileges and freedoms and much of its wealth to an over-wide and not especially poorer hinterland of Tories from Cheddar to Burnham or whether it was the creation of the Bridgwater and West Somerset Parliamentary Constituency that has seen a lifelong, permanent and un-moveable Tory majority based on remote and rural backwaters across the Quantocks, the Brendons, and Exmoor, in fact as far as the Devon border. But all that’s about to change. In May this year there will be elections to a re-strengthened Bridgwater Town Council and a strong Bridgwater presence on the new Unitary Council, with Sedgemoor nowhere to be seen after next year. And then, on the horizon, is the next bit of good news…the news that could see Ian Liddell-Grainger, and any future rural Tory out for good as the new Boundary Commission proposals see a tightening of Bridgwater’s Constituency closer to the town itself. Making it a Labour target seat! Today, Bridgwater Town Council Leader Brian Smedley, travelled to Bath to make the case at the Boundary Commissions public enquiry.

END_OF_DOCUMENT_TOKEN_TO_BE_REPLACED

Today we raised the Ukrainian flag from Bridgwater Town Hall. We do this as a symbol of our solidarity with the Ukrainian people who are the victims of a major aggression by a military superpower and with the many brave Russian people who are standing up and opposing the war in the most difficult of circumstances. The war must end, and any differences must be solved without further bloodshed and by returning to talking and by agreeing a peaceful way forward. Until that time there is and will continue to be a humanitarian crisis and the people of Bridgwater, as everywhere, are stepping up and playing their part. There are at least three different groups collecting for Ukrainian refugees who are fleeing to Poland. These groups are going to send vans to east Poland where lots of refugees arrived and so collection points around Somerset are now being publicised so that people can contribute.

END_OF_DOCUMENT_TOKEN_TO_BE_REPLACED

Outside, the heavens had opened. But inside it was like heaven itself as the grandiose setting of Bridgwater Town Hall played host to the autumn meeting of Bridgwater Town Council.  The crowds gathered to hear the latest Unitary updates, Climate Change initiatives, Town Deal priorities, Transport schemes and Youth projects. By which I mean 3 people braved the weather and sat as lonely as 3 clouds in the 500-seat auditorium. But in fact we had a special guest.  This month we’d managed to get down the newly elected Police and Crime Commissioner Mark Shelford to his first grilling by Bridgwater councillors. The plan was to take the PCC on a tour of the hotspots of the town so he could see for himself. But it poured down with rain so we didn’t. Instead we took him into a small Guantanamo Bay style interview room and ‘had a little chat’.

END_OF_DOCUMENT_TOKEN_TO_BE_REPLACED

In May 2015 the newly elected Bridgwater Town Council promised to open its doors to the wider public, engage in extensive community consultation and keep people informed and up to date with what’s going on in our town. This column is the Council Leaders contribution to that process.