The Mayor of Bridgwater for 2022-23 is Cllr Liz Leavy.  Liz is the first female Mayor in 36 years and only the 8th ever in the history of Bridgwater.

Liz was born Elizabeth Phelps in Manchester in 1943. Her mother, Kathleen Phelps, had family in the Bridgwater area and in later years the family returned to their ancestral home. Liz lived in many places around the country travelling with her father Glyn’s job as a Presbyterian Minister eventually London where she spent much of her time including going to University there in the 1960s.

Like her mother, Liz became both a teacher and a councillor. Both taught at the Girls Grammar school, but Liz went on to teach at Haygrove, Chilton and Sydenham and the finally at Bishop Foxes in Taunton.

Liz  married  Jim Leavy, who came from Athlone in the Irish Republic, in 1970 and who she met while working for Marshall & Snelgrove (which later became Debenhams) up in London. Jim was Deputy Manager of linens and Soft Furnishings. Although they lived for a while in Dublin,  Ireland Liz chose to return to Bridgwater when she became pregnant in 1971. Together they had 3 children Jason, Caroline and Veronica. Jim sadly died in 2001 but the couple have 4 grandchildren and a grandchild.

In later years Liz worked in Bridgwater library and continued as a stalwart of the Bridgwater Labour Party. Liz usually stood in seats that she was unlikely to win but one day in 2015 she stood in the Tory stronghold  of Wyndham only to find that the Conservatives didn’t stand that year due to ill health and as a result she found herself elected to town council. Finally getting the council bug she stood again in 2019 and was elected to both Town and Sedgemoor District Councils for the Hamp area, to which she was elected again in 2022.

Liz is a fluent speaker of French and German and takes a special interest in the arts, becoming the Towns portfolio holder for art,culture and heritage in 2019 and now Mayor in 2022.

For information about the role of Mayor of Bridgwater click here.

PAST MAYORS OF BRIDGWATER

From 1465 until 1972 Bridgwater’s Mayors were seen as the Leader of the Town Council. But from 1973 Bridgwater became part of Sedgemoor District Council and the role of councillor elected in Bridgwater was reduced to simply ‘Charter Trustee’ whose limited powers amounted to electing one of them to be Mayor for the incoming year. For many years an arrangement between Labour and the Tories to share the role of Mayor was in place, probably reflecting the power of the new Tory controlled Sedgemoor  over Labour Bridgwater. But then in 1995 with the collapse of Tory power across the country Labour regained confidence and wrested back control of the Town Mayoralty with only one Tory (Philip Smeed) being invited to the role in 2007. 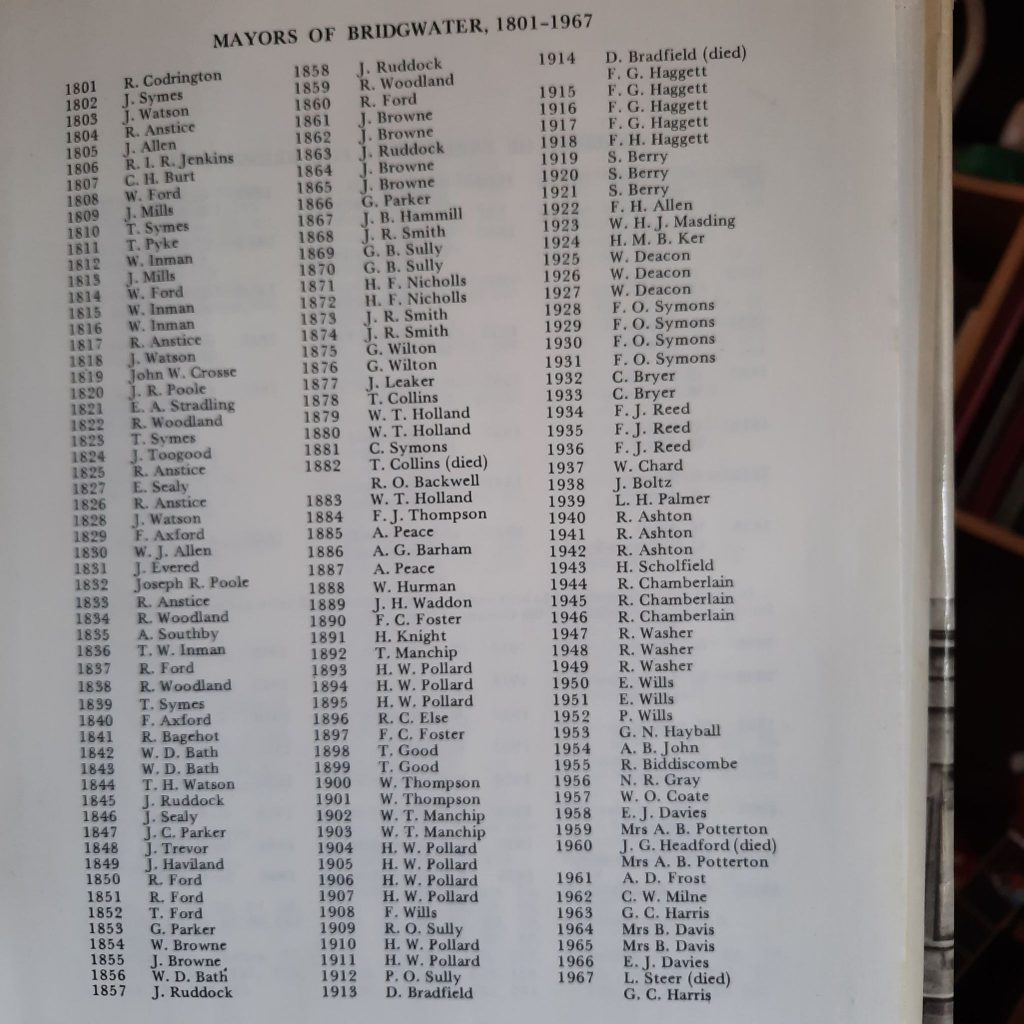 From 2003 the Government allowed Bridgwater to regain many of its ancient powers by creating a Town Council. With this new ‘parish’ status elections were held specifically for the role of Town Councillor.