Bridgwater History Day has become an annual tradition and features an array of local historians talking about local history at the local Arts Centre to a packed house. Of locals. This year the event will be held on Saturday 23rd November from 10am until 4pm and will feature 6 speakers covering subjects including ‘6 Bridgwater Bridges’, ‘Samuel Taylor Coleridge’, ‘Parliamentary elections’, ‘Donald Crowhurst’ and ‘British Cellophane’. The event will be free as will the lunch!

The event will be opened by Mayor of Bridgwater Tony Heywood

This years programme has now been finalised

1035-45 Introduction by Val Bannister   Having missed some years of childhood schooling due to illness, great-grandmother Val Bannister became a lifelong education enthusiast.  Working life split between working with delinquent teenage lads and, after taking a law degree at University of Kent in her mid-50s, editing a Liability Law journal for Lloyds (working with real “delinquents”, lawyers and insurance brokers!). After retirement she took a clutch of A-levels, then a History, Heritage and Archaeology degree. She is now researching agricultural developments in the Poldens during their ownership by Glastonbury Abbey as part of a Cambridge Certificate in Early Medieval Studies.

1045 David Greenfield – “Six Bridgwater Bridges”“  David Greenfield graduated from Leeds University in 1964 with a BSc (Civil Engineering) and spent 30+ years as a bridge engineer with Somerset County Council. David took voluntary redundancy in 1998 and was awarded a PhD in 2011 for a thesis entitled ‘I.K. Brunel and William Gravatt, 1825-1841: their personal and professional relationship’. David has  represented SW England on the Institution of Civil Engineers’ Panel for Historical Engineering Works for the past 30 years.

1130 Stewart Richards “The History of Cellophane and its manufacture in Bridgwater”    :   Stewart Richards is a local man educated at Friarn primary and Dr Morgans Grammar School; he is the son of former mayor Ken Richards.Stewart is a Chartered Chemist and Member of the Royal Society of Chemistry. Stewart has spent his entire working life in the field of flexible packaging holding a series of managerial posts at British Cellophane prior to transferring to the USA for 14 years with UCB Films. During his time at British Cellophane he held the posts of Quality manager, Technical Manager and Manufacturing manager. He is now a semi-retired consultant to the flexible packaging industry and is also an active volunteer at the Blake Museum

1215 Matthew Smith “The Two Voyages of Donald Crowhurst” – Matthew Smith will tell the unusual life story of former Bridgwater councillor Donald Crowhurst, businessman and amateur yachtsmen. Crowhurst’s decision to enter the Sunday Times ‘Golden Globe Race’ would lead to the tale of two voyages, one real and one imagined. Matthew is Course Leader for History and Religious Studies at the College. He is also a member of the Historical Association.

1400 Val Bannister “Welcome to the afternoon”

1410 Chris Sidaway “Coleridge in Somerset and the Coleridge way”   Chris Sidaway had a career as design consultant and then local government arts administrator but has had a parallel amateur career as a local historian and archaeologist. During his time as an Arts Officer he contributed to setting up the River Parrett Trail and came up with the concept of the Coleridge Way both of which are promoted heritage walking trails. The Coleridge Way encompassed his love of arts and heritage and will be the subject of his talk today.

1440 Val Bannister “The Battle of Sedgemoor”

1450 Brian Smedley “Who did we elect?–A History of Bridgwater’s MPs since Ghenghiz Khan” Brian Smedley is a local historian who wrote a series of historical plays and books in the 1980s and regularly publishes articles on Bridgwater’s history on the Westover web. He is a Leeds University graduate in International History and Politics and currently the Leader of Bridgwater Town Council. This year he gives a totally impartial run down of everyone we’ve ever elected since the days of the Mongol Hordes. 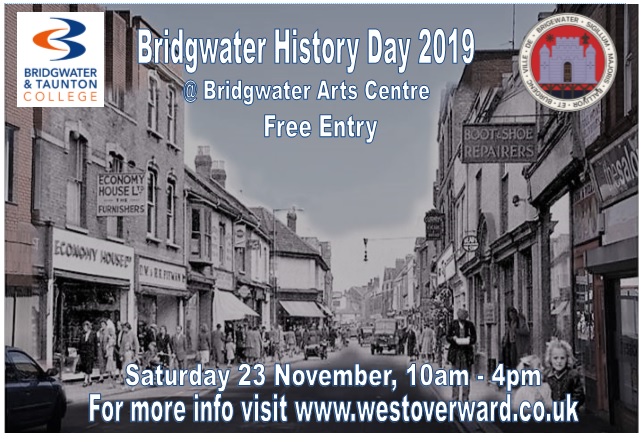