Bridgwater Together brings together community groups that celebrate the towns diversity and for several years has organised a public event in the Autumn in the Engine Room. This year the group chose to make the event bigger and better and held the event in Bridgwater Town Hall . The date ,Saturday November 13th, featured live music on stage, talks and films in the Charter Hall and a range of more than 20 stalls staffed by various community groups. The theatre was turned into an international cafe for the day with free food from around the world available so that people could enjoy the many things the event has to offer. The doors opened from 11am to 3pm. It was a free event and everybody  dropped in and out as they wished. Some 3-400 people were involved during the day. 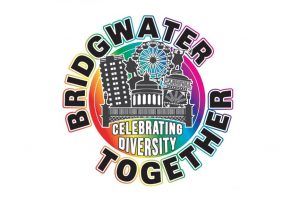 The event was organised by newly elected Chairperson of Bridgwater Together  Vivian Rybertt . Vivian, who comes from Chile said ”  Our program was a diverse cocktail from food to music, from talks to community engagement activities tailored for our community.

Programme for the day

International Kitchen- included  food from Bulgarian, Syria, Poland and the UK was served from 12.30 and co-ordinated by Anna from the Engine Room.

Scenes from the day