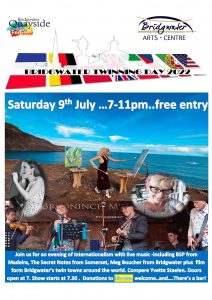 For the last few years Bridgwater Twinning Forum has timed it’s annual event with the town’s Quayside Festival. So On Saturday July 9th this year people can spend the day enjoying  music, comedy, dance, carnival and street theatre to their hearts content around the streets of Bridgwater and when they think it’s all over, pop over to the Arts Centre for the evening for the Twinning Show. Bridgwater has 7 Twin towns around the world and this is the day they all get together and put on a celebration of international friendship with music, film and up to date information. The show starts at 7.30 and this year the event will be free (but with an option to make a donation to Ukraine). 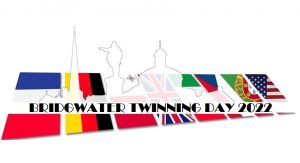 Organiser, Town Council Leader Brian Smedley, said “Bridgwater has 7 twin towns. And whilst it’s not called the Septuplet Forum, the spirit of international friendship is integral to bringing together peoples from across the world. Bridgwater’s first twin was La Ciotat in France back in 1957. In the 1980’s as we became more involved with the European Union Sedgemoor developed links with the German District of Schwalm Eder and in 1992 Bridgwater directly linked with the town of Homberg within that district. The same year Bridgwater became the first British town to twin with a Czech town after the velvet revolution which saw the collapse of communism. That link with Uherske Hradiste is celebrating it’s 30th anniversary this Month. In 2006 we twinned with the former British territory of Malta and in 2015 it was Priverno in Italy.”

“Just before the pandemic we managed a new twinning with Camacha on the Portuguese island of Madeira in 2019. Finally we have been developing links with the USA. Initially through the Joe Strummer connection with the city of Seattle, whose KEXP radio station runs an annual Clash Day event in which we participate (and in 2015 we used the occasion to sign a punk twinning with Seattle) but also Bridgwater has good links with Bridgewater, Massachusetts which we relaunched during the pandemic as part of the Black Lives Matter movement. All of these links matter to our partner communities around the world so people are invited to come and share in them and learn more at our July 9th twinning day”.

For a history of the Bridgwater Czech link click here.

The event on the 9th July will start with some films from the 7 twin towns and the show will also be broadcast simultaneously on you tube.

But the show will also feature music from far and wide.

From far, the Portuguese performance artist BSP will be singing and painting (yes) at the same time and from wide, Cllr Smedley will be playing the guitar.

And all for free.

Bridgwater singer Meg Boucher will be doing a spot too plus the event will be compered by Somerset’s own Yvette Staelens.

The event is free and there’s a bar and it runs from 7 (doors open) to 11pm on Saturday 9th July at the Bridgwater Arts Centre.

On Friday 8th July from 12 to 3 we group will be holding an international ‘Petanque’ tournament at Victoria Park, the game that was invented in our French twin town of La Ciotat. Last year’s winners were the Bridgwater Czech team. Just saying.