For the first time in many years the Police were not in attendance at last nights Bridgwater Town Council meeting. Because the meetings are now held on Zoom the Police say they are not able to use this format. Town Council Leader Brian Smedley (Westover) said “We have always made Police issues the number one item on our agenda and the Police have always responded positively to this. At this time there is a general perception of increased levels of anti social behaviour in the town yet Police are saying instances are down on this time last year. People don’t accept this and so councillors need a forum to bring the publics concerns to the Police who need to be open to public scrutiny. As a result we are going to set up a ‘Police Priorities Forum’ whereby the Police can attend in whatever format they are legally able to but where councillors can question them and bring the concerns of the public directly to them. This will be separate to our Council Zoom meetings but will be held regularly and we will insist more frequently as the public need to be reassured and feel safe in these unusual times that we’re living through” 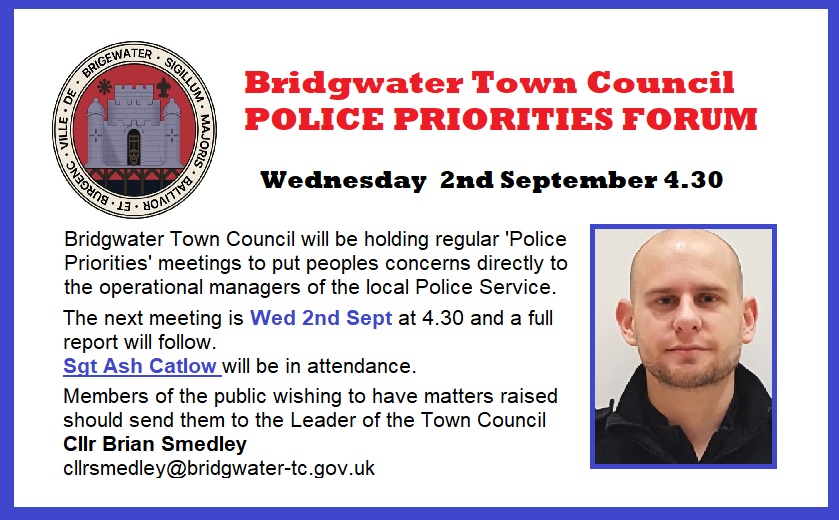 Mayor Cllr Tony Heywood will be handing over to Bridgwater’s new mayor Cllr Leigh Redman in November, six months later than planned. Due to the Covid Crisis, local councils have been operating on Zoom, offices have largely been closed and a skeleton staff has been at work with many others working from home. Bridgwater Town Council has been no exception and in March voted emergency powers to the Town Clerk, David Mears, in consultation with key Executive Councillors. Meetings were suspended and roles frozen. In May each year the Town Council usually holds an annual meeting and elects one member to be Mayor for the following year. The role of Mayor is totally ceremonial and designed to promote the Town and to Chair the meetings. In 2019-20 the elected Mayor was Cllr Tony Heywood and his Deputy Mayor  Cllr Leigh Redman. In normal years the Deputy  would become Mayor the following year. Leader of Bridgwater Town Council Cllr Brian Smedley (Labour, Westover)  takes up the story.

END_OF_DOCUMENT_TOKEN_TO_BE_REPLACED

At todays meeting of the Active Travel Cell consisting of representatives from Somerset, Sedgemoor and Bridgwater Councils, Town Councillors presented their survey of traders which showed that although there was some support for the traffic free High Street, there was nevertheless a majority of traders in favour of returning to the previous system and accordingly that was proposed to County officers. Surveys had been undertaken in Eastover, where the new single direction scheme was widely supported and in Westover where the result was closer but generally against High Street pedestrianisation. The group also noted a support however for Friday closures in order to support the market . Councillors Brian Smedley and Kathy Pearce carried out the Westover survey whilst Councillors Glen Burrows and Dave Loveridge undertook the Eastover one.

END_OF_DOCUMENT_TOKEN_TO_BE_REPLACED

Food really is a wonderful thing, it can bring joy and comfort and for many people spending an afternoon cooking can put the world to rights, not to mention delight those who benefit from your labours. Cllr Hilary Bruce, Bridgwater Fairfax said, “Everyone should have access to good, healthy food, which should also be affordable. In the UK, that should be a given, but sadly that is not the case. The British Medical Journal published an article in January 2019 (BMJ 2019;364:l126) reporting that food insecurity in the UK is amongst the worst in Europe, especially for children.”

END_OF_DOCUMENT_TOKEN_TO_BE_REPLACED

The countdown to the virtual Bridgwater Quayside Festival begins!

Visit www.bridgwaterquaysidefestival.co.uk  to view the virtual programme and tune in on the days of the festival! Follow and set your alerts to @BQuaysidefest and @FuseOutdoorArts  Facebook, Instagram, Twitter & Subscribe to the You Tube Channel to enjoy the festival over the weekend.  Fuse Somerset Outdoor Arts  This much-loved festival will be virtual over the weekend of Friday 17th to Sunday 19th, July. There will be a mix of virtual shows and performances, music and dance, exclusive footage and interviews, pop up art exhibitions, digital statues. Join in the creative workshops and the Festival quiz. Enjoy the family activities.